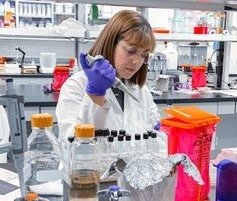 I received a B.S in microbiology in 2017 from The University of Arizona. Post graduation, I obtained a 2 year post-baccalaureate position in Dr. Paul E. Carlson’s laboratory at the U.S. Food and Drug Administration performing research on Clostridioides difficile, where I focused on making C. difficile mutants via CRISPR mutagenesis to investigate resistance to macrophage killing.

In 2019, I joined Dr. Heather Bean’s lab at Arizona State University as a microbiology PhD graduate student. My research has been focused on using GCxGC-TOFMS and data analysis tools to collect and analyze the volatile metabolites produced by Pseudomonas aeruginosa and Staphylococcus aureus. I am interested in investigating whether the volatile metabolites of both reflect genomic differences, differences in antibiotic sensitivity/resistance and, additionally, the degree in which the environment (culture media) affects the volatile profiles produced.